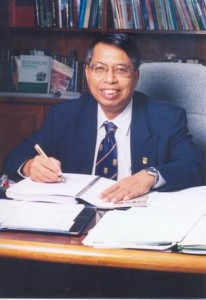 SPEAKER
Prof. Emer.Dato’ Dr. Abdul Latiff Mohamad is a former Professor of Plant Taxonomy and Biodiversity whose research interests have been in the field of Plant Systematics (Vitaceae, Rafflesia, Vatica, Barringtonia, Dilleniaceae, Rhamnaceae, Nyctaginaceae, Acanthaceae, Sapotaceaeetc) and Biodiversity (Community diversity, ecological dynamics and species diversity). He is the expert in Vitaceae and Rafflesia in Malesia. He and Mr. Wong had published Rafflesiaazlaniifrom Perak. Throughout his career he has been actively involved in the national leadership of scientific expeditions, organizing scientific seminars and editing the proceedings under the auspices of the Department of Forestry Peninsular Malaysia, State Forestry Departments, Academy of Sciences Malaysia, Sabah Foundation, Pulau Banding Foundation since 1998. His main contributions are research and publications in floristic treatments, biomass, carbon stocks, ex situ and in situ conservation.

SYNOPSIS
The taxonomic community is small and aged. Perak is endowed with many plant species named after the state such as Popowia perakensis, Amorphophallus perakensis, Begonia perakensis, Carex perakensis, Vatica perakensis Streblus perakensis, Johannesteijsmannia perakensis and Pinanga perakensis, to name a few but do Perakians know these? Like-wise many species alos took the name of locality in Perak such as Kopsia larutensis, Shorea lumutensis, Holttumochloa korbuensis, Iguanura belumensis, to name a few. In addition, Perak has some botanical celebrities too, such as Antiaris toxicaria (pokok Ipoh), Hibiscus floccosus (pokok kangsar), Peronema canescens (pokok sungkai), Garcinia hombroniana (pokok beruas), to cite a few. There must be a coordinated efforts to overcome the real taxonomic impediments in Malaysia and Perak, in particular, before it is too late. Perak also boasts of the best managed Matang mangroves in the country, if not the World, the Royal Belum State Park, the historical Bukit Larut (Maxwell Hills), amongst others.