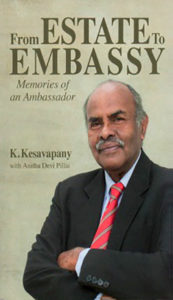 FROM ESTATE TO EMBASSY: MEMORIES OF AN AMBASSADOR

K Kesavapany, an old Andersonian, a past president of the Rotary Club in Raffles City and a former Singapore High Commissioner to Malaysia writes, “From Estate to Embassy: Memories of an Ambassador”, and paints a vivid picture of the everyday duties of a diplomat. His book is a must-read for those who are curious about what life as a diplomat is like.

As the title of his book indicates, Kesavapany’s origins are indeed humble. Born in Kuala Lumpur in November to a palm oil estate field conductor, he had a simple, idyllic childhood which would come to an end once he began his school life. His extensive education, which would see him eventually obtaining a master’s degree from London University’s School of Oriental and African Studies, would lay the foundation to his diplomatic career in Singapore and he has a colourful history of serving the republic’s diplomatic corps since its early years as an independent nation.

He entered the working world as an educator and later joined the civil and foreign service and then, after his diplomatic career, returned to education. After completing his service in Kuala Lumpur in 2002, he became Director of Singapore’s Institute of Southeast Asian Studies.

Also, in his book, he makes it no secret that it was not easy to keep uprooting himself and his family to move to distant countries where they had to start anew each time. In between descriptions of his diplomatic assignments, Kesavapany sprinkles details of little things that happened in his life with family and friends. Such little slice-of-life stories, interspersed with complex political dealings, are what makes the book a worthy read.