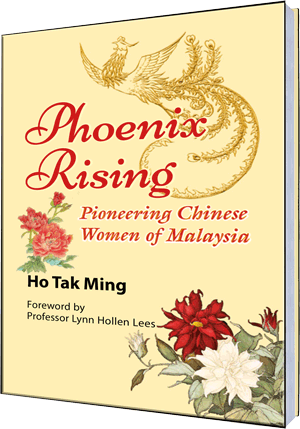 Through the centuries Chinese women have had to struggle under a load of injustices – denial of education, ineligibility to sit the civil service examinations and hold official posts, female infanticide, selling of daughters, concubinage, foot binding – just to name a few.  They had largely remained silent because they did not have voice.  As China descended to abject poverty in the nineteenth century, the lot of Chinese women became even worse.

When Chinese women came to Malaysia (Malaya then) largely from the nineteenth century onwards, the circumstances became different. Under British law, they were the equal of men, but social conditions took some time to evolve. For instance, daughters were left out of inheritance until quite recently, sons received preferential treatment in education and polygamy was declared illegal only in the 1930s. But Chinese women became successful entrepreneurs through their own ability, and, through education, many of them became distinguished professionals.

Phoenix Rising, Pioneering Chinese Women of Malaysia is the story of Chinese women who have immigrated to this country and forged  independent lives different from their lives in China.  They have shown courage, resilence and determination in improving their lives. Like the phoenix, the mythological bird that symbolizes the Chinese women, they are set to soar to greater heights given equal opportunities and just social conditions.

In conjunction with the launch is a lecture by Professor Lynn Hollen Lees entitled “CITIES AND SUCCESS: BECOMING A MODERN WOMAN IN BRITISH MALAYA”